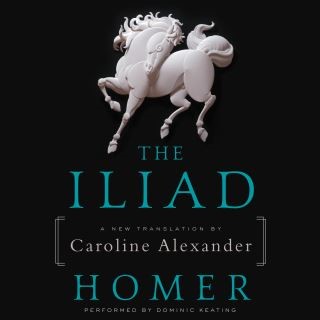 A New Translation by Caroline Alexander

With her virtuoso translation, classicist and bestselling author Caroline Alexander brings to life Homer’s timeless epic of the Trojan War

Composed around 730 B.C., Homer’s Iliad recounts the events of a few momentous weeks in the protracted ten-year war between the invading Achaeans, or Greeks, and the Trojans in their besieged city of Ilion. From the explosive confrontation between Achilles, the greatest warrior at Troy, and Agamemnon, the inept leader of the Greeks, through to its tragic conclusion, The Iliad explores the abiding, blighting facts of war.

Soldier and civilian, victor and vanquished, hero and coward, men, women, young, old—The Iliad evokes in poignant, searing detail the fate of every life ravaged by the Trojan War. And, as told by Homer, this ancient tale of a particular Bronze Age conflict becomes a sublime and sweeping evocation of the destruction of war throughout the ages.

Carved close to the original Greek, acclaimed classicist Caroline Alexander’s new translation is swift and lean, with the driving cadence of its source—a translation epic in scale and yet devastating in its precision and power.

Although recognized as one of the greatest ancient Greek poets, the life and figure of Homer remains shrouded in mystery. Credited with the authorship of the epic poems Iliad and Odyssey, Homer, if he existed, is believed to have lived during the ninth century BC, and has been identified variously as a Babylonian, an Ithacan, or an Ionian. Regardless of his citizenship, Homer’s poems and speeches played a key role in shaping Greek culture, and Homeric studies remains one of the oldest continuous areas of scholarship, reaching from antiquity through to modern times.

Caroline Alexander is the author of the international bestsellers The Endurance and The Bounty and, more recently, The War That Killed Achilles: The True Story of the Trojan War. She is a contributing writer for National Geographic magazine and her work has also appeared in The New Yorker, Smithsonian, and Outside, among other publications. Alexander received her doctorate in classics from Columbia University and was the founder of the Department of Classics at the University of Malawi in East Africa.