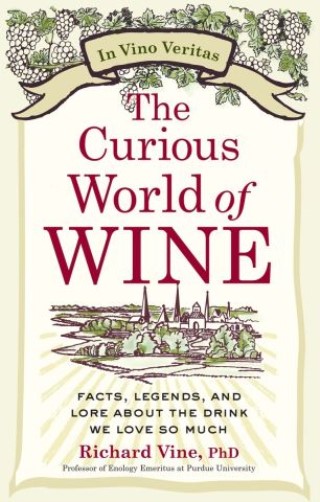 The Curious World of Wine

Facts, Legends, and Lore About the Drink We Love So Much

The Curious World of Wine is a fascinating miscellany about the colorful characters, celebrated places, and quirky events surrounding wine-making. Recounting wine tales that are by turns amusing, surprising, and occasionally a bit naughty, wine expert Richard Vine reveals little-known facts such as:

• The oldest vineyard still producing grapes is thought to be in Maribor, Slovenia, where vines up to four hundred years old remain fruitful.

• “Plonk,” a term used to insult any modestly priced wine, got its name from the French words for white wine—vin blanc, pronounced “vawn blawnk,” which was corrupted to “plawnk” or “plonk.”

• Thomas Jefferson was so eager to plant native French vines at his Monticello mansion that he nearly went bankrupt fruitlessly hiring experts to defeat a condition that caused European vines to mysteriously die in North American soil.

• Touching wineglasses as a toast was originally a deft move to exchange a splash of wine into each other’s cup to ensure that neither party was being poisoned.

The Curious World of Wine will keep any wine fan entertained and enlightened—from the most erudite connoisseur to Two Buck Chuck devotees.

Richard Vine: Born and raised in the Finger Lakes region of upstate New York, Richard Vine began his wine-making career in 1958 at the Pleasant Valley Wine Company (Great Western) in Hammondsport. While first a cellar worker and then a laboratory technician, he was promoted to winemaker and assumed responsibility for more than six million bottles of annual wine production. In 1977, Vine accepted a research position at Mississippi State University, where he earned his baccalaureate and doctorate degrees while also writing the first of four academic wine books.

Purdue University gave Dr. Vine the call in 1991 to fill their initial professor of enology position. In 1999, Purdue dedicated a wine library in his name at the Philip E. Nelson Hall of Food Science. During his university tenures, he was also the wine consultant for American Airlines for twenty-one years.