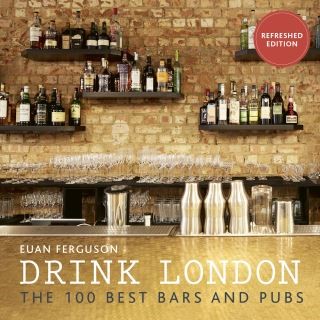 London is famous the world over for its licensed establishments, but it’s easy to be overwhelmed by the huge choice. But worry not, help is at hand! From rooftop cocktail lounges to low-beamed old inns, and underground speakeasies to the coolest craft beer bars, this is an authoritative yet lively guide to the capital’s thriving drinking scene. With stylish photography and elegant design (including a handy checklist) matched by a wealth of insider knowledge and practical information, the guide features a varied list of unique bars and pubs and illustrates why each one deserves to be on all discerning drinkers’ must-visit lists. Whether you're a Londoner or first time visitor to the capital, this original companion will be happy to provide the answer to the all important question, ‘Where shall we go for a drink tonight?’

Euan Ferguson: For the last four-and-a-half years, Euan Ferguson has been the principal bars and pubs writer for Time Out London. Every week, he travels all over the city to anonymously review cocktail bars, real-ale inns, gastropubs and hip drinking spots. As part of his role he is also Time Out’s deputy chief sub editor. Euan has contributed to numerous Time Out books, including the last five Eating & Drinking Guides and London’s Best Bars (published 2010).Before his career in journalism, Euan was a successful bar operator in Edinburgh, with years of experience at all levels of the licensed trade. This, combined with the insider knowledge that comes with visiting hundreds of establishments, allows him to write with unrivalled authority on London’s bars and pubs.