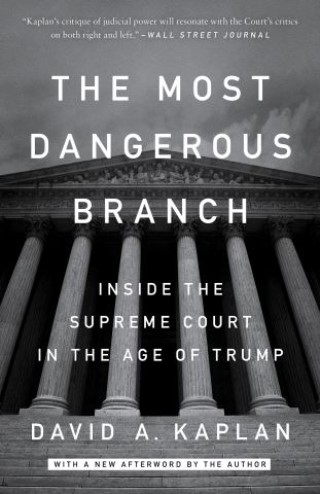 The Most Dangerous Branch

Inside the Supreme Court in the Age of Trump

In the bestselling tradition of The Nine and The Brethren, The Most Dangerous Branch takes us inside the secret world of the Supreme Court. David A. Kaplan, the former legal affairs editor of Newsweek, shows how the justices subvert the role of the other branches of government—and how we’ve come to accept it at our peril.

Never before has the Court been more central in American life. It is now the nine justices who too often decide the biggest issues of our time—from abortion and same-sex marriage to gun control, campaign finance, and voting rights. The Court is so crucial that many voters in 2016 made their choice based on whom they thought their presidential candidate would name to the Court. Donald Trump picked Neil Gorsuch—the key decision of his new administration. The newest justice, Brett Kavanaugh—replacing Anthony Kennedy—is even more important, holding the swing vote over so much social policy. With the 2020 campaign underway, and with two justices in their ’80s, the Court looms even larger. Is that really how democracy is supposed to work?

Based on exclusive interviews with the justices, Kaplan provides fresh details about life behind the scenes at the Court: the reaction to Kavanaugh’s controversial arrival, the new role for Chief Justice John Roberts, Clarence Thomas's simmering rage, Antonin Scalia's death, Ruth Bader Ginsburg's celebrity, Breyer Bingo, and the petty feuding between Gorsuch and the chief justice.

Kaplan offers a sweeping narrative of the justices’ aggrandizement of power over the decades—from Roe v. Wade to Bush v. Gore to Citizens United. (He also faults the Court for not getting involved when it should—for example, to limit partisan gerrymandering.) But the arrogance of the Court isn't partisan: Conservative and liberal justices alike are guilty of overreach. Challenging conventional wisdom about the Court's transcendent power, as well as presenting an intimate inside look at the Court, The Most Dangerous Branch is sure to rile both sides of the political aisle.

David A. Kaplan: David A. Kaplan was a senior editor and legal affairs correspondent at Newsweek for 20 years. While there, he wrote several dozen cover stories on the Court and other topics. Later he was a contributing editor at Fortune, where he wrote long-form profiles of Charlie Rose, Howard Schultz, David Geffen, and Ralph Nader, among others. He is the author of the national bestseller The Silicon Boys; an account of the 2000 presidential election, The Accidental President (on which the HBO feature film Recount was based); and Mine’s Bigger, about the largest sailboat in history, which won the Loeb Award for Best Business Book of 2008. These days, he teaches journalism and ethics at NYU and CUNY.