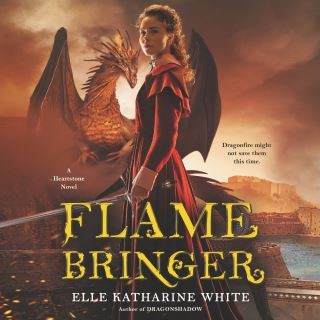 Monsters, manners, and magic combine in this exciting final volume in the Heartstone Trilogy—an exhilarating blend of epic fantasy and Jane Austen’s Pride and Prejudice—in which a fearless healer and her dragon-riding husband must stop a reawakened evil from destroying their world.

“The summons comes for the House of Edan Daired. Debts must be paid.”

Tristan Wydrick, sworn enemy of House Daired, is back from the dead. Possessed by a ghast and sharing its shadowy unlife, he commands not only the soul-sucked ghastradi, but also the monstrous Tekari forces bent on Arle’s destruction. As their enemies begin amassing, desperate Arleans look to their greatest defenders. But Aliza and Alastair Daired, along with their dragon Akarra, are far from home, trapped in the icy northern wastes by Wydrick’s treachery.

Fighting their way through blizzards, haunted forests, and their own growing fears, the Daireds find a new battle awaiting them in the capital, for the Tekari and ghastradi are not the only forces converging on the heart of the kingdom. Another moves toward Arle, riding the winds from the south: an ambassador from the Silent King of Els.

Unknown enemy? Or unexpected ally? Plunged into the dangerous world of royal intrigue and ancient grudges, Aliza and Alastair soon realize it will take more than steel and dragonfire to save their kingdom, for the silence of Els hides a secret that could shake House Daired to its foundations.

And silence, it seems, is about to be broken.

A textbook introvert who likes to throw out the (metaphorical) textbook every once in a while just to see what happens, Elle Katharine White grew up in Buffalo, New York, where she learned valuable life skills such as how to clear a snowy driveway in under twenty minutes and how to cheer for the perennial underdog. When she’s not writing, she spends her time drinking tea, loitering in libraries and secondhand bookshops, and dreaming of world travel. Heartstone is her first novel.