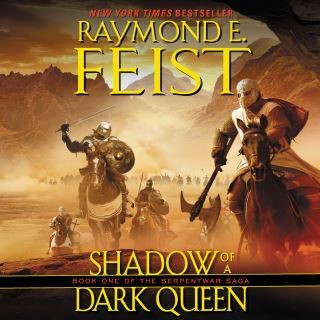 Shadow of a Dark Queen

Book One of the Serpentwar Saga

Acclaimed, New York Times bestselling fantasist Raymond E. Feist gets his masterful Serpentwar Saga off to a spectacular start with Shadow of a Dark Queen. Feist’s classic epic fantasy adventure returns readers to ever-imperiled Midkemia, a breathtaking, richly imagined realm of magic and intrigue, where two unlikely heroes must rally the forces of the land to stand firm against a malevolent race of monsters intent upon conquest and annihilation. Locus magazine calls Shadow of a Dark Queen, “the place to start for those yet to discover Feist’s fantasy worlds.” For fans of Terry Goodkind, George R. R. Martin, and Terry Brooks—and for anyone not already in the  thrall of this astonishing author’s literary magic—that is excellent advice indeed