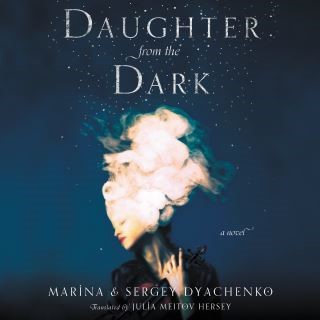 Daughter from the Dark

In this extraordinary stand-alone novel, the authors and translator of Vita Nostra—a "dark Harry Potter on steroids with a hefty dose of metaphysics" (award-winning author Aliette de Bodard)—return with a story about creation, music, and companionship filled with their hallmark elements of subtle magic and fantasy.

Late one night, fate brings together DJ Aspirin and ten-year-old Alyona. After he tries to save her from imminent danger, she ends up at his apartment. But in the morning sinister doubts set in. Who is Alyona? A young con artist? A plant for a nefarious blackmailer? Or perhaps a long-lost daughter Aspirin never knew existed? Whoever this mysterious girl is, she now refuses to leave.

A game of cat-and-mouse has begun.

Claiming that she is a musical prodigy, Alyona insists she must play a complicated violin piece to find her brother. Confused and wary, Aspirin knows one thing: he wants her out of his apartment and his life. Yet every attempt to get rid of her is thwarted by an unusual protector: her plush teddy bear that may just transform into a fearsome monster.

Alyona tells Aspirin that if he would just allow her do her work, she’ll leave him—and this world. He can then return to the shallow life he led before her. But as outside forces begin to coalesce, threatening to finally separate them, Aspirin makes a startling discovery about himself and this ethereal, eerie child.

Marina And Sergey Dyachenko, a former actress and a former psychiatrist, are the coauthors of twenty-eight novels and numerous short stories and screenplays. They were born in Ukraine, lived in Russia, and now live in the United States. Their books have been translated into several foreign languages and awarded multiple literary and film prizes, including the 2005 Eurocon award for Best Author. They live in Marina Del Rey, California.