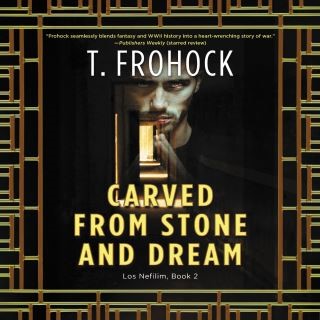 Carved from Stone and Dream

In this sequel to Where Oblivion Lives, the first entry in the Los Nefilim series set during the Spanish Civil War, a coded notebook containing the identities of Los Nefilim’s spies falls into enemy hands, and Diago is faced with an impossible choice: betray Los Nefilim or save his family.

Catalonia has fallen. Los Nefilim is in retreat.

With the Nationalist forces hard on their heels, the members of Los Nefilim—Spanish Nephilim that possess the power to harness music and light in the supernatural war between the angels and daimons—make a desperate run for the French border.

Diago Alvarez, a singular being of angelic and daimonic descent, follows Guillermo and a small group of nefilim through the Pyrenees, where the ice is as treacherous as postwar loyalties—both can kill with a single slip. When a notebook of Los Nefilim’s undercover operatives falls into a traitor’s hands, Diago and Guillermo risk their lives to track it down. As they uncover a pocket realm deep within the Pyrenees, Diago discovers his family is held hostage.

Faced with an impossible choice: betray Los Nefilim, or watch his family die, Diago must nurture the daimonic song he has so long denied in order to save those he loves.

T. Frohock has turned her love of dark fantasy and horror into tales of deliciously creepy fiction. She currently lives in North Carolina where she has long been accused of telling stories, which is a Southern colloquialism for lying.

Check out more of her works and news at www.tfrohock.com.