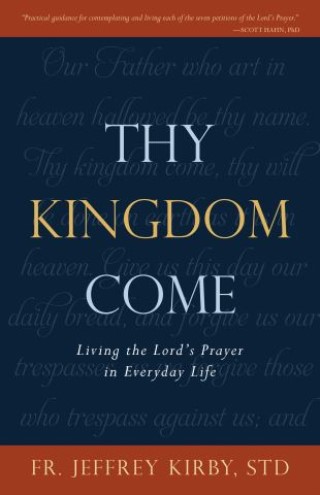 It's the most well-known Christian prayer in the world, but do we truly understand its power and meaning?

We regularly pray it. We learned it while we were still learning to speak. It's one of the most important prayers ever given to the human family.

And yet, many of us take it for granted, missing its depth and breadth. But this is the Lord's Prayer. It's called by such a distinguished name because the Lord Jesus gave it to us after his apostles asked him how to pray.

He taught them then with this prayer, and it teaches us still today.

These and many other spiritual insights are given through the seven tenets of the Lord's Prayer. And Thy Kingdom Come is your helpful guide and practical resource to explore them all!

Jeffrey Kirby: Fr. Jeffrey Kirby is pastor at Our Lady of Grace Catholic Church in the Diocese of Charleston in Indian Land, South Carolina. He is the author of several books, including Kingdom of Happiness: Living the Beatitudes in Everyday Life; Doors of Mercy: Exploring God's Covenant with You; and Lord, Teach Us to Pray. He has appeared on EWTN, Salt + Light television, and the BBC, as well as on Catholic radio. In 2016, in recognition of his widespread service to young adults, he received the Order of the Palmetto, South Carolina's highest civilian honor. Kirby is an adjunct professor of theology at Belmont Abbey College and Pontifex University/Holy Spirit College. He is also a spirituality contributor to Crux and a guest columnist for The Catholic Thing. He served in a number of parish and Catholic school positions in South Carolina. He is a veteran of the Army National Guard, for which he received several ribbons and medals. Kirby also has led retreats for various monasteries and schools of the Visitation Sisters throughout the world. He earned a bachelor's degree in history and a master's degree in philosophy from Franciscan University of Steubenville, where he also was given the 2017 John King Mussio Award for Faithful Service to the Church. Kirby also earned a bachelor's degree in sacred theology from the Pontifical Gregorian University. He has a master's degree in bioethics from the Pontifical Athenaeum Queen of the Apostles in Rome and a licentiate in moral theology from the Pontifical University of the Holy Cross in Rome, where he also earned a doctorate in sacred theology.