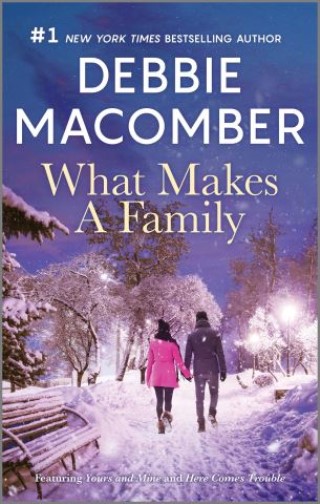 What Makes a Family

Marriage is an experience that single mom Joanna Parsons doesn’t plan to repeat, no matter what her eleven-year-old daughter thinks. Tanner Lund feels the same way. Like Joanna, he got divorced after a short, disastrous marriage. And like her, he’s raising his eleven-year-old daughter alone. But the girls have other plans in mind—and it involves the best friends becoming sisters. Both Tanner and Joanna are determined to avoid marriage, yet there’s no resisting their growing attraction…

Maryanne Simpson is working hard to make it as a journalist; it’s not her fault that her father happens to own the newspaper! After rival columnist Nolan Adams writes an unflattering piece about her, she’s furious. But Maryanne decides the tough, streetwise newsman is right about one thing: her life has been too easy. So she quits her job, leaves her luxury apartment and swears not to touch her trust fund. She needs to prove to Nolan—and to herself—that she’s got what it takes to make it on her own. She wants Nolan’s respect…and maybe more. When they end up as neighbors, Maryann discovers that she can’t resist Nolan’s gruff charm, and although he doesn’t seem to be an appropriate match for a socialite, Maryanne has other ideas!

Debbie Macomber: Debbie Macomber is a #1 New York Times bestselling author and a leading voice in women’s fiction worldwide. Her work has appeared on every major bestseller list, with more than 170 million copies in print, and she is a multiple award winner. The Hallmark Channel based a television series on Debbie’s popular Cedar Cove books. For more information, visit her website, www.debbiemacomber.com.