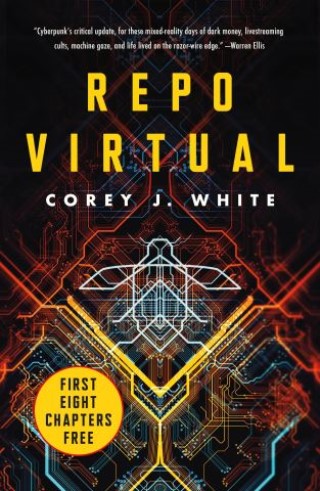 Can't wait for the cyberpunk heist of the century? Check out this free sneak peek of Corey J. White's Repo Virtual. Dive into the first eight chapters and meet the crew that's about to change the world.

The city of Neo Songdo is a Russian doll of realities — augmented and virtual spaces anchored in the weight of the real. The smart city is designed to be read by machine vision while people see only the augmented facade of the corporate ideal. At night the stars are obscured by an intergalactic virtual war being waged by millions of players, while on the streets below people are forced to beg, steal, and hustle to survive.

Enter Julius Dax, online repoman and real-life thief. He's been hired for a special job: stealing an unknown object from a reclusive tech billionaire. But when he finds out he's stolen the first sentient AI, his payday gets a lot more complicated.

At the Publisher's request, this title is being sold without Digital Rights Management Software (DRM) applied.

Corey J. White: COREY J. WHITE is a writer of science-fiction, horror, and other, harder to define stories. He studied writing at Griffith University on the Gold Coast, and is now based in Melbourne, Australia. He is the author of Killing Gravity, Void Black Shadow, and Static Ruin.