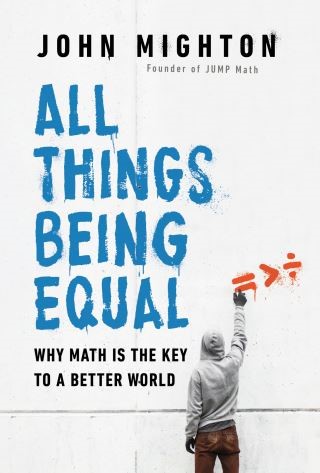 All Things Being Equal

Why Math Is the Key to a Better World

From the award-winning founder of JUMP Math, All Things Being Equal is a proven guide to succeeding in math, and a passionate argument for why this success can and must be available to the majority instead of the privileged few.

For two decades, John Mighton has developed strategies for fostering intellectual potential in all children through learning math. Math, Mighton says, provides us with mental tools of incredible power. When we learn math we learn to see patterns, to think logically and systematically, to draw analogies, to perceive risk, to understand cause and effect--among many other critical skills. Yet we tolerate and in fact expect a vast performance gap in math among students, and live in a world where many adults aren't equipped with these crucial tools. This learning gap is unnecessary, dangerous and tragic, he cautions, and it has led us to a problem of intellectual poverty which is apparent everywhere--in fake news, political turmoil, floundering economies, even in erroneous medical diagnoses.
In All Things Being Equal, Mighton argues that math study is an ideal starting point to break down social inequality and empower individuals to build a smarter, kinder, more equitable world. Bringing together the latest cognitive research and incremental learning strategies, Mighton goes deep into the classroom and beyond to offer a hopeful--and urgent--vision for a numerate society.

John Mighton: JOHN MIGHTON is a mathematician, author and the founder of JUMP Math, a charity dedicated to helping people fulfil their potential in math. His first two books, The Myth of Ability and The End of Ignorance, were national bestsellers. Mighton has been recognized as an Ashoka Fellow, awarded five honorary doctorates for his lifetime achievements and appointed as an Officer of the Order of Canada. He is also is an award-winning playwright: he's received the prestigious Siminovitch Prize in Theatre, two Governor General's Literary Awards for Drama, the Dora Award and the Chalmers Award. He lives in Toronto.