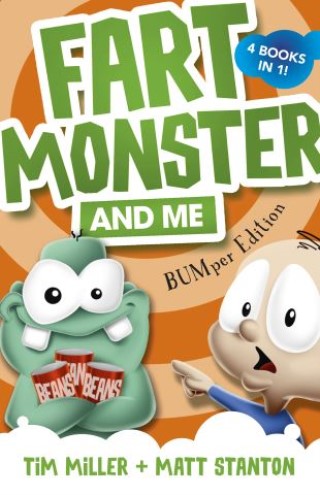 Fart Monster and Me

'THESE BOOKS REALLY GO OFF!'
-- Mac Park, Boy Vs Beast

The chapter books your reluctant reader will actually want to read!

FART MONSTER AND ME is the hilarious series from bestselling duo Tim Miller and Matt Stanton -- sure to get kids laughing ... and reading!

A bindup of the four books in the series: The Crash Landing, The New School, The Birthday Party, The Class Excursion.

'I would recommend this book and series to readers who ... don't really enjoy reading that much -- I think this series could help to change that.' - ReadPlus.com.au

Tim Miller: Tim Miller is an Australian bestselling children's author living in Sydney. By day, he is a Marketing Manager, and in his spare time he writes hilarious books for kids of all ages. His first picture book, There is a Monster Under My Bed Who Farts, was an instant hit. He has now published eight picture books, including Dinosaur Dump and Don't Spew in Your Spacesuit.

Tim's most recent publications are the four books for emerging readers in the Fart Monster and Me series, and a picture book celebrating fatherhood, Happy Farter's Day.Matt Stanton is a bestselling children's author and illustrator, with over 930,000 books sold in Australia alone. He is the co-creator of the mega-hit picture books There Is a Monster Under My Bed Who Farts and This Is a Ball. He launched his much-anticipated middle-grade series, Funny Kid, in 2017. The first book in the series, Funny Kid for President, debuted as the #1 Australian kids' book, and Funny Kid is fast winning legions of fans around the world. He lives in Sydney with his wife, bestselling picture book creator Beck Stanton, and their three young children.