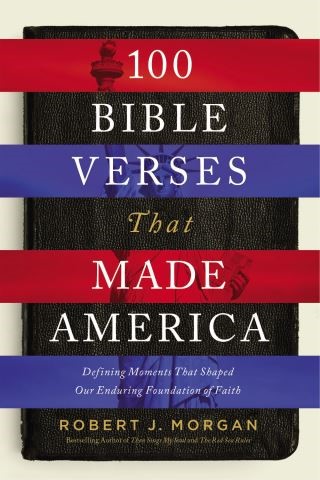 100 Bible Verses That Made America

Defining Moments That Shaped Our Enduring Foundation of Faith

Esteemed author Robert J. Morgan explores 100 Bible verses that powerfully impacted our leaders during defining moments in American history and reflects upon what these verses mean for us as a nation today.

The Bible has played a starring role in American history from our nation’s beginnings. When George Washington was sworn into office as our first president, he did not place his hand on the Declaration of Independence or the Constitution of the United States, as hallowed as those documents are. Instead, he swore upon and even kissed the Bible to sanctify this important moment. The Bible, Washington knew, had ushered American history to this point.

Trying to explain American history without its Bible is like trying to understand the human body without its bloodstream. Had there been no Bible, there would be no America as we know it. It is the Bible that made America.

While not every Founding Father was a Christian, a Bible-believer, or a paragon of virtue and not every leader has honored the Bible nor appreciated its influence, there is an undeniable history of leaders who’ve been intimately acquainted with the contents of the Bible, who’ve studied its scriptures and respected its teachings. Journey with Robert J. Morgan as he teaches about the Bible’s role in the defining moments and impact on the people of our nation’s history, reminding us of the beauty at the intersection of faith and country and reigniting our hearts’ passions for both.

Robert J. Morgan is a writer and speaker who serves as the teaching pastor at The Donelson Fellowship in Nashville. He is the author of The Red Sea Rules, The Strength You Need, Reclaiming the Lost Art of Biblical Meditation, Then Sings My Soul, and many other titles, with more than 4.5 million copies in circulation. He is available to speak at conferences and conventions. He and his wife, Katrina, have three daughters and sixteen grandchildren. Contact him at www.robertjmorgan.com.