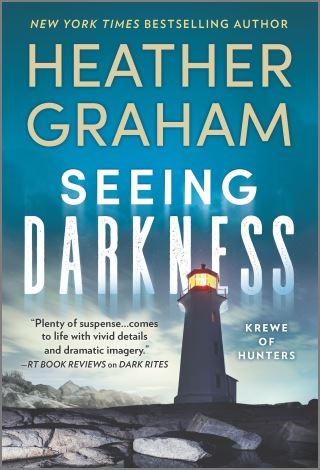 It was supposed to be a fun girls’ weekend in Salem, but when a past-life regression session instead sends a terrifying vision of murder to Kylie Connelly, she’s shaken and doesn’t know what to think. Worse, later she identifies the attacker from her vision: he’s a prominent local politician.

Special Agent Jon Dickson of the FBI’s Krewe of Hunters is on the trail of a suspected serial killer based on the scantest of clues and unreliable witness testimony. When he realizes Kylie’s vision might be his best lead, he must gain her trust and get close enough to guide her new talent. Though she doubts herself, the danger Kylie sees is all too real—and the pair will have to navigate a murderer’s twisted passions and deceptions to stop the killer from claiming another victim.

Heather Graham: New York Times and USA Today bestselling author Heather Graham has written more than a hundred novels. She's a winner of the RWA's Lifetime Achievement Award, and the Thriller Writers' Silver Bullet. She is an active member of International Thriller Writers and Mystery Writers of America. For more information, check out her websites: TheOriginalHeatherGraham.com, eHeatherGraham.com, and HeatherGraham.tv. You can also find Heather on Facebook.