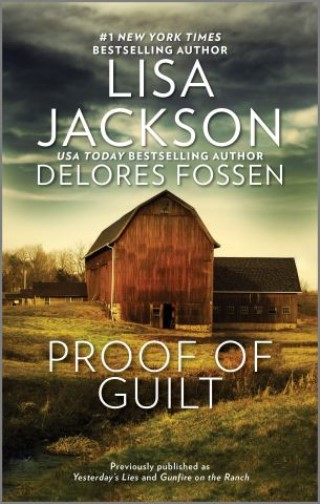 It's been five years since Trask McFadden betrayed Tory's trust and landed her father behind bars. She'd hoped Trask was out of her life forever, but now he's back, claiming to have information that might prove her father's innocence. For the sake of her family, Tory's trying to forgive, but she's finding it much harder to forget when Trask stirs up feelings she'd thought were long gone…

Gunfire on the Ranch by Delores Fossen

DEA agent Theo Canton may have been the town bad boy, but murder was never his MO. Too bad his girlfriend at the time didn’t see it that way. Now Ivy Beckett isn’t just the girl who broke his heart—she’s the target of a killer. Theo vows to keep Ivy safe, even as he meets the son he never knew about. But will it be enough to catch the perp and give their family a second chance?

Lisa Jackson: Lisa Jackson is a #1 New York Times bestselling author of more than seventy books including romantic suspense, thrillers and contemporary and historical romances. She is a recipient of the RT Book Reviews Reviewers’ Choice Award and has also been honored with their Career Achievement Award for Romantic Suspense. Born in Oregon, she continues to make her home among family, friends and dogs in the Pacific Northwest. Visit her at www.lisajackson.com.USA Today bestselling author, Delores Fossen, has sold over 70 novels with millions of copies of her books in print worldwide. She's received the Booksellers' Best Award, the Romantic Times Reviewers' Choice Award and was a finalist for the prestigious Rita ®. In addition, she's had nearly a hundred short stories and articles published in national magazines. You can contact the author through her webpage at www.deloresfossen.com