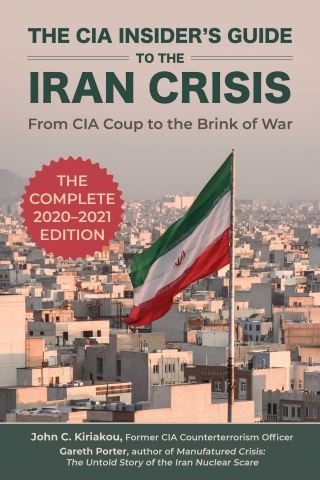 The CIA Insider's Guide to the Iran Crisis

From CIA Coup to the Brink of War

Why did the CIA overthrow Iran's democratically elected government? And why has the United States treated Iran as one of its biggest enemies for four decades? Is the Trump administration’s “Maximum Pressure” campaign working, or will it precipitate a war with Iran?
In The CIA Insider's Guide to Iran: from CIA Coup to the Brink of War, former CIA Officer John C. Kiriakou and investigative journalist and historian Gareth Porter explain how and why the United States and Iran have been either at war or threatening such a war for most of the forty years since Islamic Republic of Iran was established. The authors delve below the surface explanations for the forty-year history of extreme U.S. hostility toward Iran to blow up one official U.S. narrative after another about Iran and U.S. policy.

Against the background of Iran’s encounters with heavy-handed British and Russian imperialist control over its resources, this book shows how the U.S. began its encounter with Iran by clearly siding with British imperialism against Iranian aspirations for control over its oil in its 1953 overthrow of the Mossadegh government, then proceeded to actively support the Saddam Hussein regime’s horrific chemical war against Iran.

The book shows how a parade of politically-motivated false narratives have taken U.S. Iran policy progressively farther from reality for three decades and have now brought the United States to the brink of war with Iran. It explains how Donald Trump’s trashing of the nuclear deal with Iran and seeking to cut off Iran’s oil exports creates a very high risk of such a war, demanding major public debate about changing course.

The CIA Insider's Guide to the Iran Crisis also includes appendices with key official documents on U.S. policy toward Iran, with particular emphasis on the major official statements of the Trump administration’s “Maximum Pressure” strategy.

Gareth Porter: Gareth Porter is an investigative historian and journalist specializing on the U.S. national security state. He has covered dozens of exclusive investigative stories about U.S. policy in U.S. wars and military operations in Vietnam, Iraq, Afghanistan, Pakistan, Yemen and Syria and U.S policies toward Iran. He is author of five books, including Perils of Dominance: Imbalance of Power and the Road to War in Vietnam (University of California Press, 2005) and Manufactured Crisis: the Untold Story of the Iran Nuclear Scare (Just World Books, 2014).

John Kiriakou is a former CIA counterterrorism officer, former senior investigator for the Senate Foreign Relations Committee, and former counterterrorism consultant for ABC News. He was responsible for the capture in Pakistan in 2002 of Abu Zubaydah, then believed to be the third-ranking official in al-Qaeda. In 2007, Kiriakou blew the whistle on the CIA’s torture program, telling ABC News that the CIA tortured prisoners, that torture was official US government policy, and that the policy had been approved by then– President George W. Bush.  He is the author of multiple books on intelligence and the CIA.
John Kiriakou is a former CIA operative and senior investigator for the Senate Foreign Relations Committee. A target of the Obama administration’s war on whistleblowers, he remains the only US official to serve time behind bars after revelations of CIA “enhanced interrogation” practices, despite openly opposing the torture program. He maintains that his case was about exposing torture, not leaking information, adding, he “would do it all over again.” He currently resides in Arlington, Virginia, with his family.