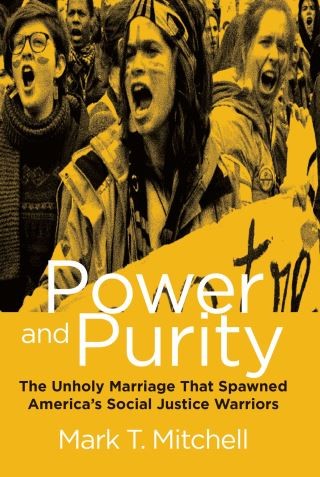 A Marriage Made in Hell

Where did they come from, these furiously self-righteous “social justice warriors”?

The growing radicalism and intolerance on the American left is the result of the strange union of Nietzsche’s “will to power” and a secularized Puritan moralism. In this penetrating study, Mark T. Mitchell explains how this marriage made in hell gave birth to a powerful and destructive political and social movement.

Having declared that “God is dead,” Friedrich Nietzsche identified the “will to power” as the fundamental force of human life. There is no good or evil in a Nietzschean world—only the interests of the strong. Reason and the common good have no place there.

The Puritan, by contrast, is morally rigorous, zealous to promote virtue and punish vice. America’s Puritan tradition, now thoroughly de-Christianized, has been reduced to a self-righteous moral absolutism that focuses on the faults of others, intent on avenging the sins of society, institutions, and the past in pursuit of the secularized ideals of equality, diversity, and social justice.

As Nietzsche’s ideas have permeated our culture, a new generation of radicals has embraced the rhetoric and tactics of the will to power. But the strength of America’s residual Puritanism keeps them only half-baked Nietzscheans. More Christian than they care to admit, they cling to a moralism that Nietzsche would despise.

The incoherence of their mixed creed dooms social justice warriors to perpetual frustration. Their identity politics generates ever more radical demands that can never be satisfied, further fracturing a society in desperate need of a unifying myth. We seem to be left with only two options, Mitchell concludes—Nietzsche or Christ, the will to power or the will to truth. The choice is bracingly simple.

Mark T. Mitchell: MARK T. MITCHELL is the Dean of Academic Affairs and professor of government at Patrick Henry College in Purcellville, Virginia. He earned his Ph.D. at Georgetown University and is the co-founder and president of the online journal Front Porch Republic. His six previous books include The Limits of Liberalism, The Politics of Gratitude, and Localism in the Mass Age: A Front Porch Republic Manifesto (co-editor).