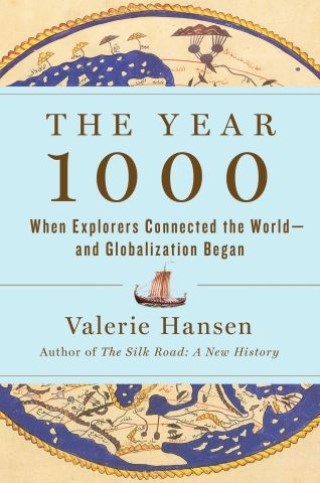 From celebrated Yale professor Valerie Hansen, a groundbreaking work of history showing that bold explorations and daring trade missions connected all of the world’s great societies for the first time at the end of the first millennium.

People often believe that the years immediately prior to AD 1000 were, with just a few exceptions, lacking in any major cultural developments or geopolitical encounters, that the Europeans hadn’t yet reached North America, and that the farthest feat of sea travel was the Vikings’ invasion of Britain. But how, then, to explain the presence of blonde-haired people in Maya temple murals at Chichén Itzá, Mexico? Could it be possible that the Vikings had found their way to the Americas during the height of the Maya empire?

Valerie Hansen, an award-winning historian, argues that the year 1000 was the world’s first point of major cultural exchange and exploration. Drawing on nearly thirty years of research, she presents a compelling account of first encounters between disparate societies, which sparked conflict and collaboration eerily reminiscent of our contemporary moment.

For readers of Jared Diamond’s Guns, Germs, and Steel and Yuval Noah Harari’s Sapiens, The Year 1000 is an intellectually daring, provocative account that will make you rethink everything you thought you knew about how the modern world came to be. It will also hold up a mirror to the hopes and fears we experience today.

Valerie Hansen: Valerie Hansen is the Stanley Woodward Professor of History at Yale University, where she teaches Chinese and world history.  An accomplished scholar and author, she traveled to nearly twenty countries to conduct research for The Year 1000. She is also the author of The Silk Road: A New History and The Open Empire.