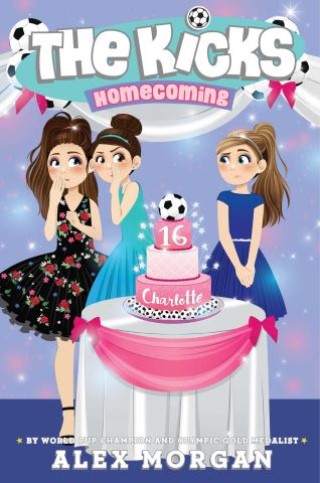 Devin is finally on her way to Connecticut to visit her best friend, Kara, and she couldn’t be more excited! Not only that, but the Kicks have just made it into the playoffs!

Except Devin’s good fortune seems to have run out. First, the airport sends her luggage to Albuquerque. Then, when she finally gets to hang out with Kara, all they do is fight. And what’s worse, Devin thinks her parents are planning to move them back to Connecticut!

Devin’s not sure what to make of her unfortunate homecoming. Are she and Kara even friends anymore? Is Devin ready to leave all her friends behind again to move back to Connecticut? And can she get her head back in the game in time to win the Kicks’s first playoff match?

Alex Morgan: Alex Morgan became the youngest member of the US women’s national soccer team in 2009 and competed in the 2011 FIFA World Cup. She was the first overall pick in the 2011 Women’s Professional Soccer draft and landed a spot on the US Olympic women’s soccer team in 2012. At the 2012 Summer Olympic Games, held in London, Morgan won her first Olympic medal, a gold, with the American team. In 2015, she achieved her lifelong goal of winning a World Cup trophy, in the most-watched soccer match in US history. She now plays for the Orlando Pride in Orlando, Florida.