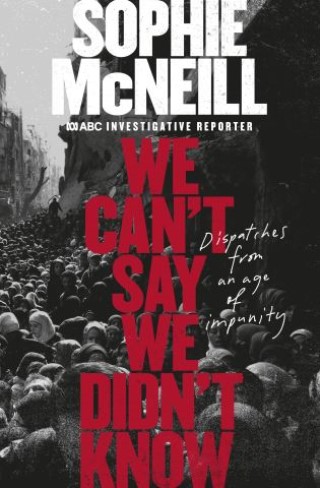 We Can't Say We Didn't Know

For more than 15 years, award-winning journalist Sophie McNeill has reported on some of the most war-ravaged and oppressive places on earth, including Syria, Gaza, Yemen, West Bank and Iraq.

In We Can't Say We Didn't Know, Sophie tells the human stories of devastation and hope behind the headlines -- of children, families and refugees, of valiant doctors, steadfast dissidents and Saudi women seeking asylum. These innocent civilians bear the brunt of the lawlessness of the current age of impunity, where war crimes go unpunished and human rights are abused. Many risk everything they know to stand up for what they believe in and to be on the right side of history, and their courage is extraordinary and inspiring,

McNeill also examines what happens when evidence and facts become subjective and debatable, and how and why disinformation, impunity and hypocrisy now reign supreme. We can't say we didn't know - the question now is, what are you going to do about it?

Sophie McNeill is an investigative reporter for Four Corners. A former foreign correspondent based in the Middle East for the ABC, she's worked across the region, including in countries such as Afghanistan, Israel, Iraq, Pakistan, Syria, Yemen, Egypt, Turkey and Gaza. Sophie has twice been awarded Australian Young TV Journalist of the Year and in 2010 won a Walkley award for her investigation into the killing of five children in Afghanistan by Australian Special Forces soldiers. Sophie was nominated for a Walkley in 2015 for her coverage of the Syrian refugee crisis. Sophie previously worked as a reporter for ABC's Foreign Correspondent and SBS's Dateline program and is a former host of triple j's news and current affairs program Hack. We Can't Say We Didn't Know is her first book.