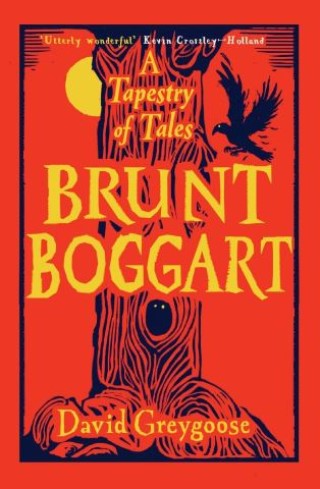 A Tapestry of Tales

This is a book like no other: a magical tapestry of folk tales, woven together to build a world that is as strange yet familiar as a half-remembered dream. It is an old world, a world of enchanted corn dollies and wild dances in poppy fields, a world of tricksters, lovers and fools.
Through this world, Greychild must journey in search of his mother: from the village of Brunt Boggart, down the treacherous Pedlar Man's track, all the way to distant Arleccra, a city of treasures and temptation. If you follow him, a part of you will never come back.

David Greygoose: David Greygoose was born near Northampton and now lives on the edge of Liverpool. In 1976 he co-founded The Windows Project which runs writing workshops in schools and community venues. He has published three collections of poetry under the name Dave Ward, and his stories and poems have appeared in over 100 anthologies as well as being broadcast on TV and radio. Brunt Boggart is his first novel and was nominated for the CILIP Carnegie Medal.