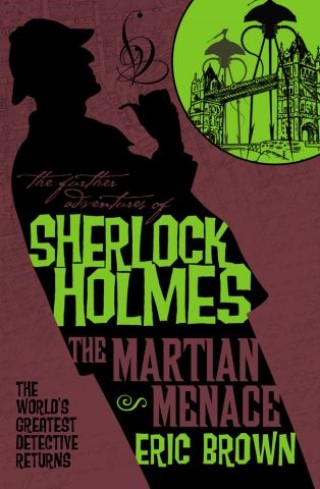 The Further Adventures of Sherlock Holmes - The Martian Menace

A new addition to the Further Adventures of Sherlock Holmes series from science fiction and crime author Eric Brown.

A second wave of Martians has come to Earth - the first wave having succumbed to lethal Terran pathogens. The second wave, arriving some five years later, did so with the aid of a cure for the various ills that scuppered their earlier plans - and these Martians claim to have come in peace.

Humankind, lulled into a false sense of security, welcomes the Martians who bring with them a host of technological and scientific wonders, and for several years an entente exists between the two races. It is only when Holmes and Watson travel to the Red Planet, ostensibly to track down the killer of an eminent Martian philosopher, that they learn the truth: the Martians who invaded Earth are tyrannical despots who subjugated a 'lesser' race of their own kind, and are merely biding their time to enslave the citizens of Earth. With the assistance of anti-Martian activist Miss Freya Hadfield-Bell, and a cadre of renegade Martians, Holmes and Watson escape Mars with their lives and return to Earth where they hope to work to overcome the rule of the oppressive Martian overlords.

Eric Brown: Eric Brown is a British science fiction author. His story "The Time-Lapsed Man" won the Interzone readers' poll for the most admired story of 1988, and an Eastercon short text award in 1995. He was voted the Best New European SF writer of the Year in the early 1990s and has subsequently won the British Science Fiction Award twice (for the short stories "Hunting the Slarque" in 1999 and "Children of Winter" in 2001).