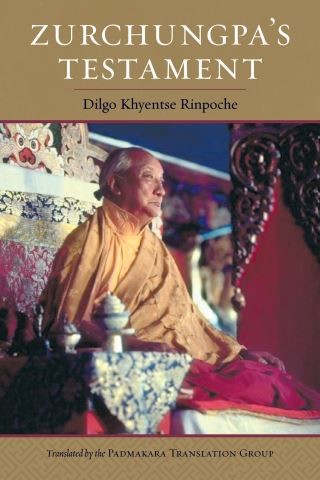 Zurchungpa's Eighty Chapters of Personal Advice was the final teaching given by the great Nyingma master Zurchung Sherab Trakpa before he passed away. His counsels are the distillation of a lifetime's experience and comprise the practical instructions of a master who had made the teachings of the Great Perfection truly part of himself. The original text consists of almost 580 maxims, organized into eighty chapters covering the entire path of Dzogchen, from fundamental teachings on devotion and renunciation, through to a whole series of pith instructions that bring the Dzogchen view to life. Much of the meaning of these pithy, often cryptic, instructions could be lost on the reader without the help of the notes Shechen Gyaltsap Rinpoche provided in his annotated edition, which he based on the explanations he received from his own teacher, Jamyang Khyentse Wangpo.

This book contains a complete detailed teaching on Zurchungpa's text by Dilgo Khyentse Rinpoche, based on Shechen Gyaltsap's notes. Originally intended as essential instructions for a group of practitioners in three-year retreat, it will undoubtedly serve as an indispensable guide to anyone who seriously wishes to practice the Great Perfection.

Zurchung Sherab Trakpa (1014-1074) was a key teacher in the Zur tradition, one of the handful of kama lineages through which the teachings of the Ancient Tradition were transmitted from master to disciple, beginning with Guru Padmasambhava and Vimalamitra, right down to the Nyingma masters of the present day. He was a learned scholar and accomplished meditation master who spent many years in retreat, practicing the teachings of the Great Perfection.

Shechen Gyaltsap Rinpoche (1871-1926) was an important disciple of Jamyang Khyentse Wangpo the Great and one of Dilgo Khyentse Rinpoche's root teachers. An accomplished meditator, he was also one of the most respected scholars of his day, whose writings fill thirteen volumes.

Dilgo Khyentse: Dilgo Khyentse Rinpoche (1910–1991) was a highly accomplished meditation master, scholar, and poet, and a principal holder of the Nyingma lineage. His extraordinary depth of realization enabled him to be, for all who met him, a foundation of loving-kindness, wisdom, and compassion. A dedicated exponent of the nonsectarian Rime movement, Khyentse Rinpoche was respected by all schools of Tibetan Buddhism and taught many eminent teachers, including His Holiness the Dalai Lama. He tirelessly worked to uphold the Dharma through the publication of texts, the building of monasteries and stupas, and by offering instruction to thousands of people throughout the world. His writings in Tibetan fill twenty-five volumes.