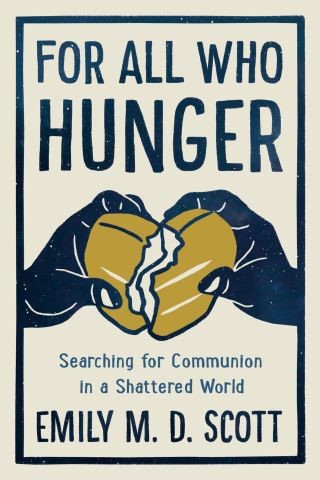 For All Who Hunger

Searching for Communion in a Shattered World

Emily Scott never planned on becoming a pastor. But when she started a church for misfits that met over dinner in Brooklyn, she discovered an unlikely calling—and an antidote to modern loneliness.

As founding pastor of St. Lydia’s in Brooklyn, New York, where worship takes place over a meal, Emily M. D. Scott spent eight years ministering to a scrappy collective of people with different backgrounds, incomes, and levels of social skills. Each week they broke bread, sang hymns, made halting conversation with strangers, then did the dishes. In a city where everyone lives on top of each other yet everyone is lonely, these gatherings around a table offered connection and solace that soon would become their lifelines.

When Hurricane Sandy slams into the coast of New York, Scott and her church members are faced with a disorienting crisis. Startled by the impact of the storm on their more vulnerable neighbors, they learn to work alongside one another, bailing water out of basements and canvassing emptied apartment buildings. Every week, they return to those steady, strong tables at Dinner Church. Together, they find community, even in the midst of disaster. Scott discovers how small acts of connection hold more power than we realize in a time when our differences are being weaponized, and learns to create activism and justice work fueled by empathy and relationship.

With tenderness and humor, Scott weaves stories and reflections from the life of her unlikely congregation while articulating the value of church as a place where people can hear not only that they are loved but that they are good.

For All Who Hunger is a story about a God whose love has no limits and a faith that opens our eyes to the truth. There’s a place for you at the table.


Praise for For All Who Hunger

“In this intimate and openly heartfelt debut memoir, Scott explores the power of faith and community as strength-building resources for navigating difficult times. . . . A moving personal memoir and an accessibly reverent meditation on finding faith through unconventional acts of worship. Highly inspiring for anyone seeking solace in our modern world.”—Kirkus Reviews (starred review)

“Lutheran pastor Scott asks in her exceptional debut: if you strip from church all ‘the creeds and the chasubles,’ what would be left? The answer, for her, became St. Lydia’s Dinner Church in New York City, which she founded in 2008 as a place for queer, marginalized, artistic, nerdy, and often lonely lovers of God to gather for bread, wine, and the words of Jesus . . . Scott’s writing is leavened by a healthy dose of self-awareness, and her stories capture the humanity of her mission and community with a light sacramental touch.” —Publishers Weekly (starred review)

Emily M. D. Scott: Emily M. D. Scott founded St. Lydia’s Dinner Church, a progressive, LGBTQ+-affirming congregation in Brooklyn, New York, where worship takes place around the dinner table. A Lutheran pastor (ELCA), Scott is a graduate of Yale Divinity School and the Institute of Sacred Music. Her writing has appeared in The New York Times, and her work at St. Lydia’s, which sparked a wider Dinner Church movement, has been featured in The Wall Street Journal and The Atlantic. After serving eight years at St. Lydia’s, Scott is now creating a new church community, Dreams and Visions, in Baltimore, Maryland.