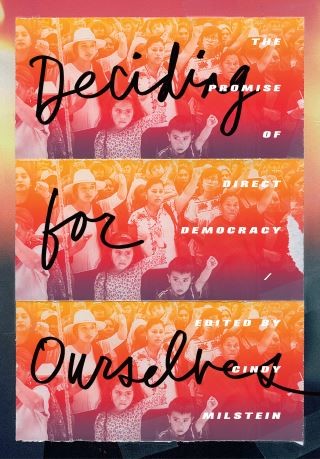 The Promise of Direct Democracy

This book addresses the general sense of hopelessness that many are feeling these days about the inadequacy of existing political and economic systems to deal with the crises we face. Deciding for Ourselves doesn’t simply offer theoretical solutions, Milstein has located concrete, on-the-ground social experiments around the world and solicited writing from their founders and participants outlining what has and hasn’t worked.

Although not recent enough to be a comp title, the collection of essays by Murray Bookchin, published posthumously by Verso in 2015, The Next Revolution: Popular Assemblies and the Promise of Direct Democracy is the closest predecessor to Cindy's book. Cindy was a student of Bookchin and is consciously carrying on his legacy, by locating and promoting actually existing examples of ordinary people creating directly decomrcatic institutions and cultures in the shadows and interstices of decidedly undemocratic situations.

Bookchin's idea have been adopted and put into practice by Kurdish people in Rojava and other places (you may have seen newspaper accounts of anarchists heading over to northern Syria to fight with the Kurds). Cindy's book covers Rojava and much more including: