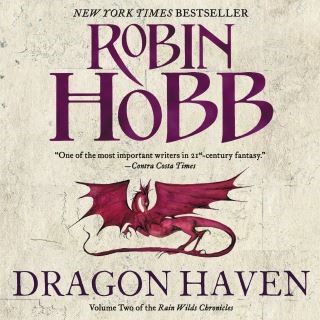 “A full master of the epic fantasy.”
—Tulsa World

One of the world’s most acclaimed fantasists, New York Times bestselling author Robin Hobb returns to the world of her popular “Tawny Man” trilogy with Dragon Haven—the second book, following Dragon Keeper (“Imaginative, literate, and compassionate from first page to last” —Booklist) in an epic adventure about the resurgence of dragons in a world that both needs and fears them. Hobb, whose Soldier Son Trilogy (Shaman’s Crossing, Forest Mage, Renegade’s Magic) has won raves from critics, fans, and peers alike, returns to the Rain Wilds with Dragon Haven, and readers of Raymond Feist, Terry Brooks, and Lois McMaster Bujold will eagerly follow.

Robin Hobb was born in California but grew up in Alaska. It was there that she learned to love the forest and the wilderness. She has lived most of her life in the Pacific Northwest and currently resides in Tacoma, Washington. She is the author of five critically acclaimed fantasy series: The Rain Wilds Chronicles (Dragon Keeper, Dragon Haven, City of Dragons, Blood of Dragons), The Soldier Son Trilogy, The Tawny Man Trilogy, The Liveship Traders Trilogy, and The Farseer Trilogy. Under the name Megan Lindholm she is the author of The Wizard of the Pigeons, Windsingers, and Cloven Hooves. The Inheritance, a collection of stories, was published under both names. Her short fiction has won the Asimov's Readers' Award and she has been a finalist for both the Nebula and Hugo awards.