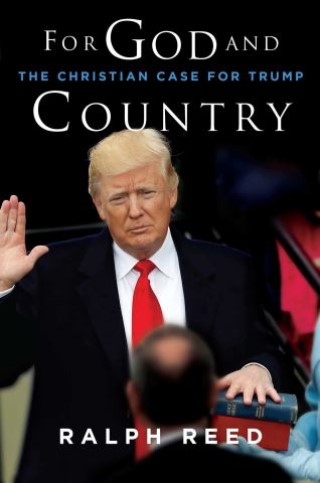 For God and Country

The Christian Case for Trump

In 2016, many Christian leaders opposed candidate Donald Trump. He was a social liberal, and his vulgarity, divorces, affairs, and scandals made it impossible for him to defend Christian values in public life. Or so they thought.

Trump nevertheless won an overwhelming majority of the Evangelical vote in 2016, as well as the Catholic vote. And in 2020, the idea that he can’t represent Christians is demonstrably false. He has been the most ardent and effective presidential defender of religious liberty and the pro-life cause since Ronald Reagan—whom he has even surpassed in many ways.

In For God and Country, Dr. Ralph Reed draws on his deep knowledge of American history, his unsurpassed experience as a political strategist, his personal dealings with President Trump and the First Family, and his moral commitment as a Christian to show why Catholics and Evangelicals should continue to support their unlikely champion.

In For God and Country, Reed reveals:

Ralph Reed: Dr. Ralph Reed Jr. is the chairman and CEO of Century Strategies, a public relations and public affairs firm. He has worked on eleven presidential campaigns, chaired the Georgia Republican Party, and served on the Evangelicals for Trump Coalition. Reed was the founding executive director of the Christian Coalition and founded and serves as the chairman of the Faith and Freedom Coalition, a pro-family public policy organization with 2.2 million members and activists. He is the author or editor of seven bestselling books, and his columns have appeared in the New York Times, Wall Street Journal, and National Review. He earned a B.A. from the University of Georgia and a Ph.D. in history from Emory University. He and his wife, Jo Anne, have four children and one grandchild and reside in Atlanta, Georgia.