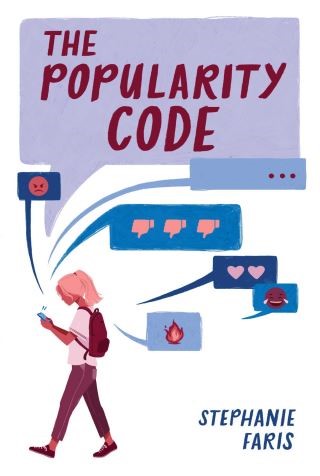 Mean Girls meets The Clique in this relatable M!X novel that tackles the effects of online bullying.

Faith Taylor is popular by association, thanks to her BFFs, Adria and Janelle. When a new website called SlamBook targets her school’s popular kids, Faith gets sucked in. And when she discovers her own page on the site, she finds herself obsessing over the comments people are posting about her. Some are good, some are…not so good. Faith becomes determined to match the negative comments to the people, and begins to retaliate by posting negative comments of her own.

Soon, Faith finds that people are talking about the comments she’s leaving. Even though she does feel guilty, it’s just so easy to be mean behind the anonymity of her laptop. But when her comments go too far, she realizes she must figure out a way to make things right before it’s too late.

Stephanie Faris: Stephanie Faris knew she wanted to be an author from a very young age. In fact, her mother often told her to stop reading so much and go outside and play with the other kids. After graduating from Middle Tennessee State University she somehow found herself working in information technology. But she never stopped writing. When she isn’t crafting fiction, Stephanie is indulging her gadget geek side by writing for online technology sites. Her work is regularly featured on the small business blogs for Intuit and Go Payment and she is a featured columnist for SmallBizTechnology.com. She lives in Nashville with her husband.