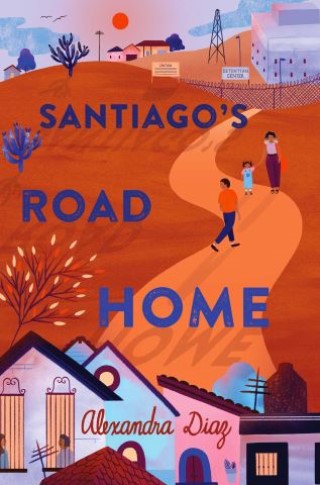 “With every chapter, readers will be further immersed in Santiago’s story as they root for his triumph over injustice.” —Booklist (starred review)
“With unflinching conviction, Diaz sketches a frank, brief account of refugee youth in an uncaring bureaucratic system.” —Kirkus Reviews (starred review)
“Harrowing but deeply illuminating.” —School Library Journal
“Diaz’s crucial narrative shines a disconcerting light on the plight of children in US detention centers along the southern border.” —Publishers Weekly (starred review)

A young boy gets detained by ICE while crossing the border from Mexico to the United States in this timely and unflinching novel by award-winning author Alexandra Diaz.

The bed creaks under Santiago’s shivering body. They say a person’s life flashes by before dying. But it’s not his whole life. Just the events that led to this. The important ones, and the ones Santiago would rather forget.

The coins in Santiago’s hand are meant for the bus fare back to his abusive abuela’s house. Except he refuses to return; he won’t be missed. His future is uncertain until he meets the kind, maternal María Dolores and her young daughter, Alegría, who help Santiago decide what comes next: He will accompany them to el otro lado, the United States of America. They embark with little, just backpacks with water and a bit of food. To travel together will require trust from all parties, and Santiago is used to going it alone. None of the three travelers realizes that the journey through Mexico to the border is just the beginning of their story.

Alexandra Diaz: Alexandra Diaz is the author of The Only Road, which was a Pura Belpré Honor Book, an ALA Notable Book, and the recipient of two starred reviews. She is also the author of Of All the Stupid Things, which was an ALA Rainbow List book and a New Mexico Book Award finalist, The Crossroads, and Santiago’s Road Home. Alexandra is the daughter of Cuban refugees and lives in Santa Fe, New Mexico, but got her MA in writing for young people at Bath Spa University in England. A native Spanish speaker, Alexandra now teaches creative writing to adults and teens. Visit her online at Alexandra-Diaz.com.