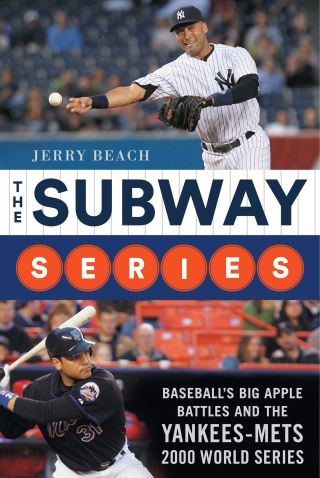 In celebration of the twenty-year anniversary of the 2000 Subway Series, Jerry Beach details the history of the series between New York's Major League Baseball clubs. From the early history of the rivalry between the Giants and Dodgers, to the Mayor's Trophy games, from the fans' old barroom and playground arguments over whose team was better, to Mike Piazza and Roger Clemens battles, and far beyond, Beach leaves no stone unturned in this comprehensive account.

Mets and Yankees fans alike can read about their favorite games, players, and managers through the years, from Tom Seaver and Jerry Koosman to Yogi Berra and Mickey Mantle, from Al Leiter and Bobby Valentine to Derek Jeter and Joe Torre. They all played an integral part in shaping the history of the intercity rivalry.

Readers might also uncover something about the psyches of Mets and Yankees fans alike. This book makes for a great gift whether you wear pinstripes or bleed blue and orange, or whether you hail from the Bronx or Queens. Finally, something both fan bases can agree upon, and the perfect addition to any baseball fan's shelf!

Jerry Beach: Jerry Beach is a Northeast-based sports writer who has covered the MLB, NFL, and NHL since 1997. The author of two books, Beach is a contributor to Forbes.com. He resides on Long Island.