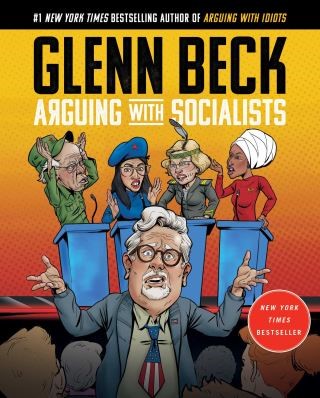 In Arguing With Socialists, New York Times bestselling author Glenn Beck arms readers to the teeth with information necessary to debunk the socialist arguments that have once again become popular, and proves that the free market is the only way to go

With his trademark humor, Beck lampoons the resurgence of this bankrupt leftist philosophy with thousands of stories, facts, arguments and easy-to-understand graphics for anyone who is willing to ask the hard questions. He shows that this new shiny socialism is just the same as the old one: a costly and dangerous failure that leaves desperation, poverty, and bodies in its wake.

Glenn Beck: Glenn Beck, the nationally syndicated radio host and founder of TheBlaze television network, has written thirteen #1 bestselling books and is one of the few authors in history to have had #1 national bestsellers in the fiction, nonfiction, self-help, and children’s picture book genres. His recent fiction works include the thrillers Agenda 21, The Overton Window, and its sequel, The Eye of Moloch; his many nonfiction titles include Conform, Miracles and Massacres, Control, and Being George Washington. For more information about Glenn Beck, his books, and TheBlaze television network, visit GlennBeck.com and TheBlaze.com.