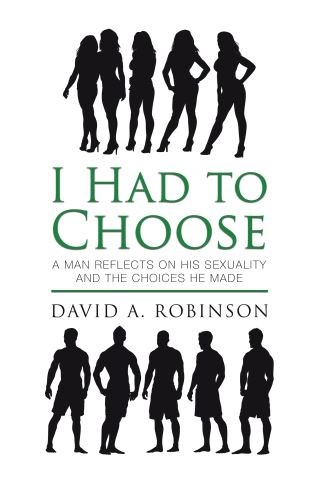 I Had to Choose

A Man Reflects on His Sexuality and the Choices He Made

Some people aren’t sure what their sexual orientation is: gay, straight, or bisexual. Various people may tell you what they think your sexual orientation is. But who really decides whether you are gay, straight, or bisexual? More importantly, who decides what you will do? Who decides whether you will date a male or female? Who decides whether you will marry a man or woman? Do these people decide? Or do you decide? When he was a teenager in the late 1960s, David A. Robinson found himself sexually excited looking at muscular, athletic boys. Some people told him he’s gay. He had to choose: date girls or boys. He chose girls. His sexual orientation somewhat limited his choice of females, but not to zero. He eventually married a woman and is very happy with her. He tells us how he got there. It wasn’t always easy, but it was his choice. Religion had nothing to do with it. Some people say you have no choice about your sexual orientation. But if you want a date, you have to choose: male or female. This is the lively, riveting, true memoir of a man who had to choose: Be who I want to be (straight), or be who some people tell me I am (gay).