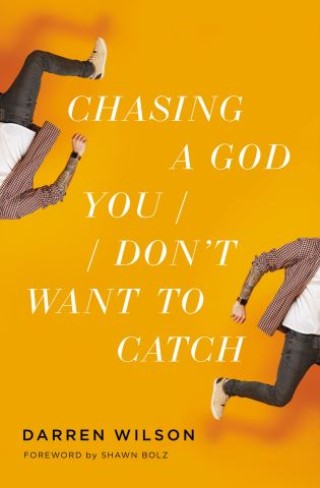 Chasing a God You Don't Want to Catch

We Are So Quick to Say We Want “More” of God, but Is That Really True?

As strange as it may sound, the most misunderstood, misrepresented, and potentially the most feared person in Christianity may very well be God Himself. Even seasoned Christians often view God as frightening, untrustworthy, and distant. But nothing could be further from the truth.

Author and filmmaker Darren Wilson takes a funny yet poignant romp through Scripture, revealing a long-time Christian’s hang-ups and fears of a God he was supposed to love. Wilson looks at questions such as:

Wilson encourages readers to be honest with themselves and with God. He challenges us to face the things many Christians struggle with but are too afraid to talk about because everyone else seems to have this faith thing figured out. He believes God isn’t afraid of our questions, doubts, fears, or even our anger. The secret to peace and friendship with God lies in understanding who He really is.

Darren Wilson is the Founder of Wp Films, a film/television production company that focuses on creating media that creatively and powerfully advances the Kingdom of God around the world. He is also an author and a speaker. Darren's films have been seen by millions around the world and have helped change the spiritual climate of the worldwide church. In addition to his films and television work, Darren is the author of three books and speaks as often as his busy schedule allows. Devon Franklin, VP of Production for Columbia Pictures, calls Darren "one of the most innovative filmmakers and authors of faith today." Find out more about Darren and his work at wpfilm.com.